In July, when the midday heat is easing, when the first shadows fall onto the water, when the water
level is slightly falling the fly fisher’s hour has arrived. The waters of the Bregenzer Ache pleasantly
cool the fly-fisher slowly cooking in his waders.

We were lucky that Claus found a free afternoon for
our shamrock – the four of us are representing together more than 250 years of lifetime – to show
us something new. Those who can only devote a week a year to fly fishing surely profit when
instructed by a true master of the trade. Nobody is perfect as Claus corrects with a lot of patience
and pedagogic skill the smaller or more awkward bad habits. Even old pig-heads enjoy learning
something new. Last year we were made understand that if the fish does not raise to the fly, the fly
has to dive down to the fish. However, how exactly this is achieved, how you can surmount the
current with a trick cast, how you guide the line to control your tracking, we receive a
demonstration in perfection. We have to admit, perfection is not for us mortals, at least we
understand what we should achieve. Like in other cases, the way is the aim and the fish is just the
cherry on the icing.

It was nice to experience that St. Peter rewards the aspiring follower. First he
lets some thunderstorms approach, which dropped the temperature a bit and made the fish hungry
for the flies. The upcoming winds did not disturb too much in the deep valley of the Ache, the
conditions for wading are good. The pools are large and deep that even with four anglers nobody
has to step twice into the same river.

A sturdy stick comes in handy not just because of age, the
round stones may shift unexpectedly.
Though only smaller fish could be tempted to rise initially, it became more and more exciting. Seppi
caught a common chub (Squalius Cephalus), which had no right to inhabit this stream and
received the capital punishment for his impertinence. The brook trout (Salmo Trutta Fario) got the
message and reacted generously to well-presented flies. Not every fish will successfully be drilled
as the fishing with barbless hooks opens a fair chance for the fish to escape, which regularly is
exploited. After a short while, Seppi successfully drilled a substantial brook trout, which could not
resist his nymph.

This was a stimulus for his friends, which had some consequences.
A nymph, which floats close to the ground, may occasionally be trapped. Such inconvenience I had
experienced in the past and had learned that with a little bit of patience, luck and changing position
the nymph may become free without loss. This time my nymph was trapped in a strange way,
which confused me considerably. When I attempted to pull the nymph carefully upstream, the
trapped nymph moved noticeably with me. Was it a heavily soaked piece of wood? As I was
contemplating this possibility, and thought of ways how to recover my nymph, the “piece of wood”
started wiggling. Even though the trees of Bregenzer Wald are of remarkable beauty, they are
definitively not producing magic driftwood. Thus it had to be a fish, which stubbornly stayed on the
ground and undecidedly but with pertinacious resistance moved slowly back and forth. A 0.20
leader is robust but still, it should not be overstressed. This could rather not be a trout, but what
monster did I have on the other end of my line? It became increasingly impatient and tried to get
rid of the nymph with shaking and larger circles. It became obvious that I had hooked an unusual
fish, which I wanted to see once at least. So I had to patiently keep pulling and controlling the line.
It was after more than 10 fearful minutes that the fish started to rise under continuous stretch. More
movement was palpable and a first glimpse showed a huge scaled flank. After almost 20 minutes
of drill and escape the fish was sufficiently exhausted, to lift him more or less safely with my scoop
net, which was at least one size too small. It was a 53cm barbel (barbus barbus) and it was the
biggest and heaviest fish I ever caught on a fly in a stream.

With the first heavy rain drops we reached our cars. Claus in apt foresight had some cool beers in
the fridge, which we enjoyed under the protecting roof of the football club of Egg. We let pass the
last hours with the dwindling light and beer to relive what we were allowed to experience. Then you
may have a wish. For example that you may want to have once upon a time a trout of the size of
such a barbel hooked and drilled. Or you may wish to be back next year and that Claus has
enough time at his hands to be your guide.
The first wish was fulfilled in the same week. I caught a 45cm brook trout in the fading light of
sunset. It has to be the perfect instruction. The Nymph was the same as the one which tempted
the barbel. We had tied it ourselves, it was green with copper-red segments thus we named it
“Annalena”. 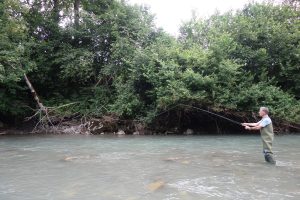 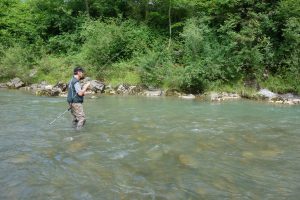 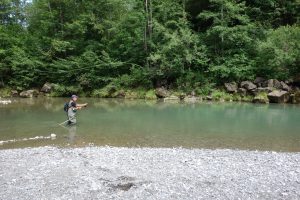 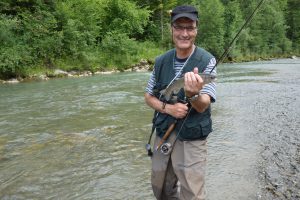 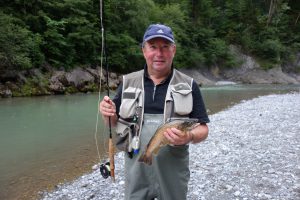 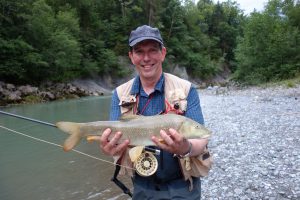 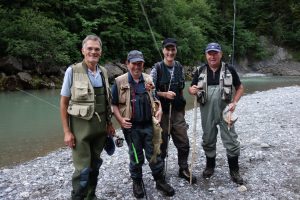 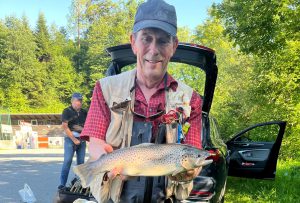